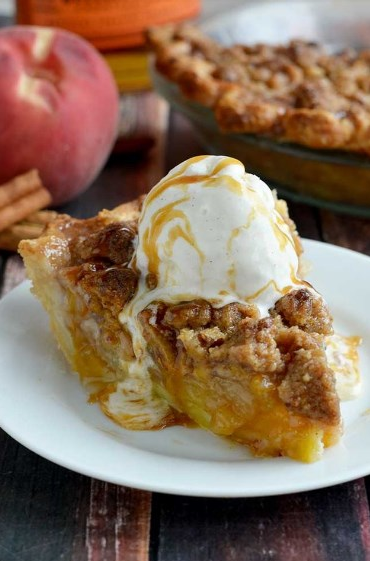 INSTRUCTIONS
If making homemade crust (you can also use frozen or refrigerated pie crust), start with that. Pour one cup of cold water into a bowl and add in a few ice cubes. Set aside.
In a large bowl, whisk 2 1/2 cups flour, 1 tablespoon sugar, and 1 teaspoon salt until well-combined.
Take out your butter. It needs to be very cold, so you may want to put it in the freezer for a few minutes to really get it solid. Cut the 2 sticks of butter into 1/2″ pieces
Use a pastry blender or food processor to combine the flour mixture and butter pieces until the butter is broken up into pea-sized pieces. DO NOT OVERMIX!
Drizzle half of the ice cold water over the mixture (making sure not to accidentally pour in any ice cubes). Using a rubber spatula, mix together the dough until large lumps form. Use your hands to knead it all into one smooth ball.
Divide the dough in half, shape into disks (balls first, then flatten a bit), and wrap in plastic wrap. Let chill in the fridge for at least an hour and a half before rolling out. Stays good in fridge for one week, longer in freezer.
When your dough is ready, flour everything. Your counter, your rolling pin, the dough itself. You want a lot of flour.
Press your rolling pin down in the center of the dough disk and push outward. Roll in that direction a few times, then lift and do a quarter turn and roll that direction a few times. Continue rolling, turning the dough, and rolling again until the entire crust is rolled out into a 12″ circle. Work quickly, you don’t want the dough to warm up.
Place the pie crust in your pie pan and fold the excess,overhanging dough underneath, so the pie is now the size of the pan.
Crimp the pie crust by making a “V” or pinching shape with your thumb and forefinger on the outside of the crust. Then, using your other pointer finger, push the crust from the inside to fit in between the V-shaped fingers. Continue all around the crust.
Refrigerate for another 30 minutes.
As you wait for your crust to cool, make the filling.
Peel and slice the peaches, and then toss in a large bowl with the cornstarch, flour, cinnamon, salt, and allspice.
Preheat oven to 350 degrees F.
In a small, heavy-bottomed saucepan over medium-high heat, combine the sugar, maple syrup, bourbon, and water. Stir JUST UNTIL the sugar dissolves and then let come to a boil. Resist the urge to stir while it boils. Swirl the pan occasionally to make sure the caramel is browning evenly, but DO NOT STIR.
Once the caramel turns an amber color, remove from heat and add in the butter, swirling the pan until the butter completely melts.
Pour the caramel over the peaches and mix well. Pour the peach-caramel filling into the prepared pie shell and place in the refrigerator once more.
Sprinkle the pecans on a baking sheet and toast for 5 minutes. Remove and set aside until cool enough to handle, then chop.
In the same small, heavy-bottomed saucepan you used for the caramel, melt a stick of butter over medium heat, stirring frequently. Cook until the butter turns golden-brown. Set aside.
Whisk together the 1 cup plus 2 tablespoons flour, 1/2 cup sugar, 3 tablespoons dark brown sugar, 1/4 teaspoon salt, and pinch of cinnamon. Mix in the pecans. Drizzle over the browned butter (which now should be slightly cooled) and mix until crumbs form.
Crumble the streusel mixture on top of a rimmed baking sheet and place in the refrigerator for 15 minutes.
Preheat the oven to 425 degrees F.
Remove the filled pie pan and the streusel from the refrigerator. Sprinkle and crumble the streusel over the pie filling until the pie filling is completely covered. Cover the pie crust with foil and put in the oven for 15 minutes. Make sure to put a baking sheet or pie drip catcher underneath, as it WILL bubble over and make a mess!
Remove the foil, reduce heat to 350 degrees F, and cook for an additional 30-40 minutes. The crust should be golden brown and the caramel should bubble when the pie is ready.
Cool for at least 3 hours. DON’T EVEN THINK ABOUT SLICING THAT PIE WHEN IT COMES RIGHT OUT OF THE OVEN! It will wind up a gooey mess.
After cooling for at least 3 hours, slice and serve with vanilla bean ice cream.