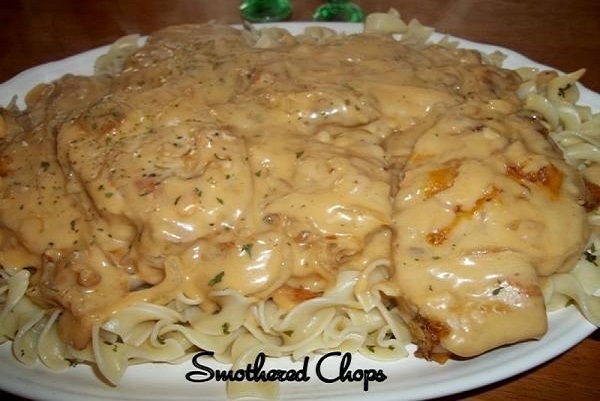 Ijust love anything made with onion…this recipe is no exception…the more the merrier. The creamy, flavorful sauce, could be eaten over mashed potatoes, noodles or rice…my kids wanted noodles. I usually prefer the bone in, center cut chops with this recipe, but all I had was boneless. This recipe can also be made in the crock pot…I didn’t have time for that, so I baked it in the oven…

2Brown chops over medium heat in oil for approximately 5 minutes each side.

3In the same skillet, caramelize onions.
4Place browned chops in the casserole dish. ( or crock pot )

6Pour mixture over chops; sprinkle with french fried onions and bake for at least 60 minutes or until chops are tender in a 350 degree oven. ( In crock Pot – 3 hrs high or 6 -7 hrs on low ).

7It should be bubbly and golden…

8-Serve over buttered, parsley egg noodles, mashed potatoes or rice.Note: Sour cream can also be mixed in at the end of crock pot method. It gives it some added flavor. ( Optional ) I like it either way. If adding to oven method, add it to the soups before pouring over meat.