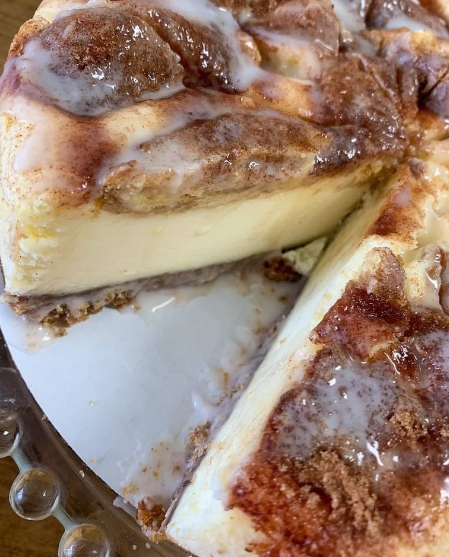 Instructions :
CRUST :
Heat oven to 325 degrees.
In a small bowl, combine crust ingredients and mix well.
Press mixture into the bottom and up the sides of a 9-inch springform pan.
Bake crust for 10 minutes then remove and set aside.
Cover the outsides of the pan with aluminum foil and set aside.
CHEESECAKE AND CINNAMON FILLING

Reduce oven to 300 degrees.
In a large bowl, mix the cream cheese, sugar and flour until combined (Use low speed to keep less air from getting into the batter, which can cause cracks). Scrape down the sides of the bowl.
Add eggs one at a time, beating slowly and scraping the sides of the bowl after each addition.
Add the sour cream, vanilla extract and cinnamon. Beat on low speed until well combined. Set aside.
In another medium bowl, whisk together brown sugar, cinnamon and flour.
Stir in melted butter.
Break apart cinnamon mixture and sprinkle pieces over the bottom of the crust, about 1/4 of the cinnamon mixture.
Spread about 1/3 of the cheesecake filling over the cinnamon mixture.
Repeat steps 7 and 8 two more times, for a total of three layers of cinnamon and three layers of cheesecake
filling.
Sprinkle remaining cinnamon mixture over top of cheesecake.
Place springform pan (covered with aluminum foil) inside another pan. Fill outside pan with enough warm water to go about halfway up the sides of the springform pan. The water should not go above the top edge of the aluminum foil on the springform pan.
Bake for 1 hour and 20 minutes.
Turn off heat and leave cheesecake in oven with door closed for 30 minutes.
Crack oven door and leave the cheesecake in the oven for about 5 minutes.
Remove cheesecake from oven and chill.
ICING